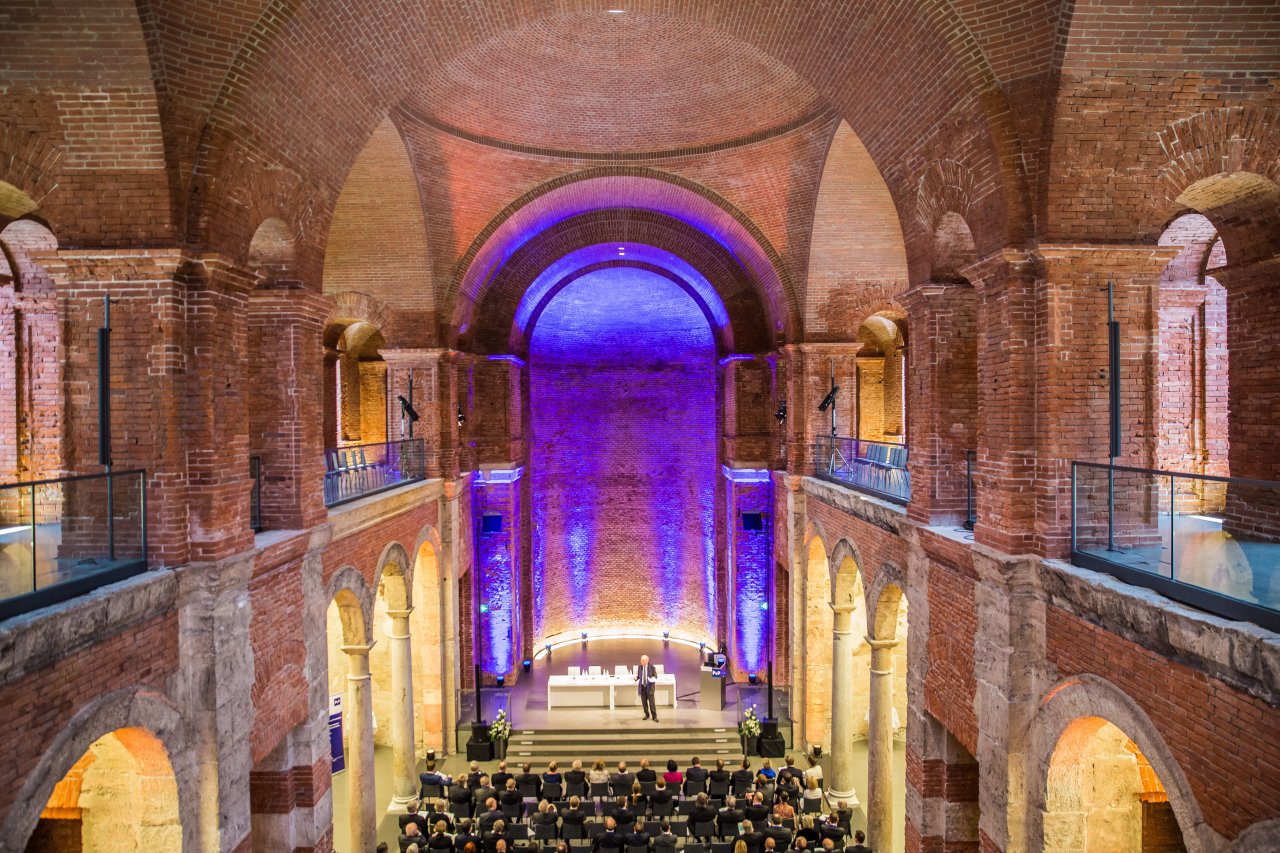 Teilen auf
On 23 February 2018, POELLATH commemorated its 20th anniversary with a celebration in Munich. Among the many guests who attended, there were representatives from all sectors of private equity, including fiscal authorities, the judiciary, academia and the scientific community and the private equity industry. The event was organized as a series of discussions by legal experts and a discussion of sociopolitical topics in the course of the afternoon at the Allerheiligen Hofkirche (All Saints’ court church), followed by a reception at the Max-Joseph Hall at the Residenz palace in the evening.

Andrea von Drygalski, one of the founding partners of POELLATH, opened the celebrations. Drygalski took the opportunity to thank the many clients and colleagues: The clients for their enduring trust, collective growth and mutual successes. The colleagues from all departments and specialties, particular representatives from the scientific community and academia, the ministries and public authorities, as well as the partners and employees of POELLATH in all of its offices, for the always constructive exchange.

On this occasion, particular thanks were granted to the other founding partners for their idea to found a small law firm with the motto “excellent, hands-on, friendly”, in particular Mr. Reinhard Pöllath for daring to “venture with the young ones” 20 years ago.

“Leadership and continuity of companies and assets is what POELLATH has concentrated on.”

In his anniversary address, Pöllath spoke on the topic “Companies and Continuity through Succession and Sale”. He described the continuity of a company as part of the daily process of change and the battle against failure. Company continuity combines contradictions; it is continuity, cooperation and creates value. Company continuity also means effort, time, pain and discontinuity. Pöllath contrasted gratuitous succession with the sale of a company and addressed the problems of the decision makers. Company continuity requires advice to ensure the values created are not just exchanged, but also grow.

Since the firm’s establishment in Fall 1997, another core practice area for POELLATH is advice on all legal and tax aspects in connection with the design of private equity structures. Within the scope of three round tables, the related current developments and legal questions arising in private equity advice were put up for discussion.

There has always been a connection between economic development and social responsibility. However, by way of the media, the connection between responsibility and counsel has increasingly been brought to the public’s attention. Moderated by Dieter Birk, former director of the Institute for Tax Law at Westfälische Wilhelms-Universität in Muenster, a first-class panel of representatives from various domains pursued the question of what social responsibility means in relation to [legal] counsel and discussed the scope and limits of greater responsibility on the part of the advisors as representatives of the clients’ interests.

Initially, however, responsibility begins with individuals, in particular with oneself. In her talk, “Culture eats Strategy for Breakfast - why non-legal skills become more important in a digital world”, Svea von Hehn, psychologist and management advisor, urges a more conscious and observant association with oneself. The increasing tempo of change, the culture of digitalization and the accompanying multitasking mode lead to concentration deficits and to switching on auto-pilot, by which one no longer consciously controls the brain. This has negative implications for capabilities in decision-making, problem-solving and in having empathy. Indeed, mindfulness techniques, such as those demonstrated by von Hehn through two audience experiments, and other non-legal skills can countervail these negative implications and train the brain in concentration, consciousness and balancing out the negative tendencies.

For this reason, 10 years ago POELLATH established a non-legal skills program to also educate young attorneys on non-technical topics such as, e.g., acceptance of responsibility and leadership qualities, as stated by Philip Schwarz van Berk, POELLATH partner.

However, although conscious and rational thinking is necessary, it is not sufficient for solving complex problems. As von Hehn states, this also requires emotional intelligence (so-called EQ) and compassion. The current culture of self-interest must transform itself into a “caring culture” informed by compassion that involves all people and also the environment in decisions, in order to cope with the current global problems. This in turn necessitates leadership, guidance and advice.

Thereby, not only politics, but also organizations, companies and advisors are accorded a responsibility for the preservation of fundamental values. Leadership must have value and intrinsic value, states Tobias Leipprand, founding CEO of LEAD Academy. Brigitte Mohn, entrepreneur, also confirms that, now more than ever, the questions of integrity and ethical norms are relevant. In a globalized world, it is even more important to call on accomplished leaders, who know not only how one maximizes profits and develops tax-saving schemes, but also how one creates added value, in which people also accept responsibility for the next generations. In turn, this requires acceptance as a plus for compliance, states Christine Hohmann-Dennhardt, former judge on the Federal Constitutional Court. Because “legal” and “legitimate” do not always go hand in hand and not everything that is doable is advisable. Therefore, Gerhard Schick, member of the German Parliament and fiscal speaker for BÜNDNIS 90/DIE GRÜNEN, exhorted those in the advisory sector to speak more about ethics, social repercussions and reputation risks. Though legitimacy is not a static term, but continuously develops in society and is influenced by discourse. The law lives from the tension between legality and legitimacy, states Hohmann-Dennhardt. It is therefore even more important that, in these times of rapid change, the advisory sector undertakes the corrective course of action, provides guidance, defines limits and thereby assumes the majority of social responsibility.

Thereafter, the guests had the opportunity for mutual exchange at the evening reception in the Residenz. Andreas Richter, POELLATH partner, commenced this part of the celebration. In retrospect, the courage of POELLATH’s founders was particularly important, to say no to many opportunities, to create a firm with a very clear profile and, ultimately, to have preserved this vision. Thus, POELLATH concentrates on specific, selected fields of the law in order to uphold the promise of quality with regard to its clients. With a thank you for the last 20 years and an optimistic view of the future, Richter turned over the address to Clemens Fuest, president of the ifo Institute Munich, who in his speech talked about economic policy challenges for Germany and remained true to the motto “No complaint is praise enough”, whereby he mainly confronted the topics of digitalization, fiscal policy and Europe.

To get an impression of the event, you can find here a picture gallery with impressions of the ceremony.

Below we provide transcripts of selected round tables and panels (only in German).